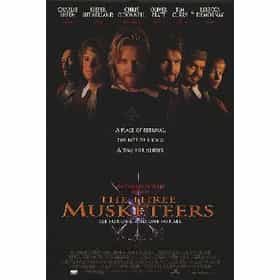 The Three Musketeers is a 1993 Austrian-American action-adventure film from Walt Disney Pictures and Caravan Pictures, directed by Stephen Herek from a screenplay by David Loughery and starring Charlie Sheen, Kiefer Sutherland, Chris O'Donnell, Oliver Platt, Tim Curry and Rebecca De Mornay. The film is loosely based on the novel The Three Musketeers by Alexandre Dumas, père. It recounts the adventures of d'Artagnan on his quest to join the three title characters in becoming a musketeer. However this adaptation simplifies and alters the story. ... more on Wikipedia

The Three Musketeers is ranked on...

The Three Musketeers is also found on...