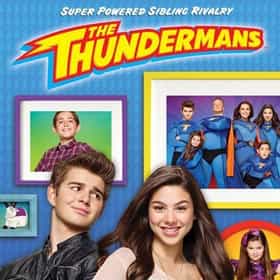 The Thundermans is an American superhero live-action comedy television series that began airing on Nickelodeon, on October 14, 2013. The series is created by Jed Spingarn. Nickelodeon announced that it ordered 20 episodes for the show. The preview premiered on October 14, 2013. The show officially premiered on November 2, 2013 stars Kira Kosarin, Jack Griffo, Addison Riecke, Diego Velazquez, Chris Tallman and Rosa Blasi. The preview received 2.4 million viewers. The series premiere received 2.6 million viewers. On December 20, 2013, the series was renewed for a second season. On March 4, 2015, the series was renewed for a third season. ... more on Wikipedia

The Thundermans is ranked on...

#15 of 32 The Best Kids Shows of 2013 2.4k VOTES Finding a great television show that’s perfect for kids to watch on a lazy Saturday morning can be tough in this day and age...
#38 of 57 The Best (and Worst) TV Shows Ending in 2018 7.3k VOTES Unfortunately, great television has a shelf life and there are many shows ending in 2018. Due to low ratings, unforeseen cir...
#16 of 105 The Best Teen Comedy Series Ever Made 3.3k VOTES Comedy series for teens have to walk a delicate line, not being so childish they’re off-putting to their audience, but also ...
#50 of 87 The Best Teen Sitcoms of All Time 24.2k VOTES The best teen sitcoms serve not only as a reflection of teen life but also an educational tool. They’re filled with moral an...
#33 of 47 The Best 2010s Nickelodeon Shows 27.3k VOTES These are the best 2010s Nickelodeon shows, ranked from best to worst by user votes. Some top 2010s Nickelodeon shows were N...
#44 of 56 The Best Kids Live Action TV Shows Ever Made 1.9k VOTES Chances are if you grew up sometime in the latter half of the 20th century, your childhood was filled with amazing chil...