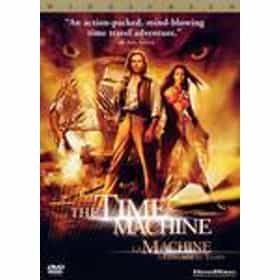 The Time Machine is a 2002 American science fiction film loosely adapted from the 1895 novel of the same name by H. G. Wells and the 1960 film screenplay by David Duncan. It was executive-produced by Arnold Leibovit and directed by Simon Wells, the great-grandson of the original author. The film stars Guy Pearce, Jeremy Irons, Orlando Jones, Samantha Mumba, Mark Addy, Sienna Guillory, and Phyllida Law, and includes a cameo by Alan Young, who also appeared in the 1960 film adaptation. The 2002 film is set in New York City instead of London and contains new story elements not present in the original novel, including a romantic backstory, a new scenario about how civilization was ... more on Wikipedia

The Time Machine is ranked on...

The Time Machine is also found on...