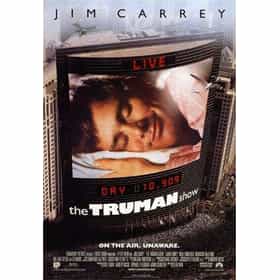 The Truman Show is a 1998 American satirical social science fiction comedy-drama film directed by Peter Weir and written by Andrew Niccol. The cast includes Jim Carrey as Truman Burbank, Laura Linney, Noah Emmerich, Ed Harris and Natascha McElhone. The film chronicles the life of a man who is initially unaware that he is living in a constructed reality television show, broadcast around the clock to billions of people around the globe. Truman becomes suspicious of his perceived reality and embarks on a quest to discover the truth about his life. The genesis of The Truman Show was a spec script by Niccol, inspired by an episode of The Twilight Zone called "Special Service". The ... more on Wikipedia

The Truman Show is ranked on...

The Truman Show is also found on...

List of All Fantasy Movies Movies Produced by Adam Schroeder