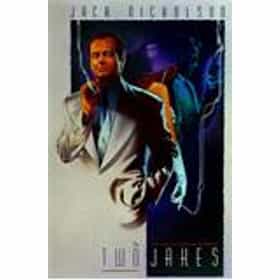 The Two Jakes is a 1990 American Neo-noir mystery film, and the sequel to the 1974 film Chinatown. Directed by and starring Jack Nicholson, it also features Harvey Keitel, Meg Tilly, Madeleine Stowe, Richard Farnsworth, Frederic Forrest, Pia Gronning, David Keith, Rubén Blades, Tracey Walter and Eli Wallach. Reprising their roles from Chinatown are Joe Mantell, Perry Lopez, James Hong, Allan Warnick and, in a brief voice-over, Faye Dunaway. The character of Katherine Mulwray returns as well, played by Meg Tilly. It was released by Paramount Pictures on August 10, 1990. The film was not a box office success and plans for a third film about J. J. Gittes, with him near the end of ... more on Wikipedia

The Two Jakes is ranked on...

The Two Jakes is also found on...