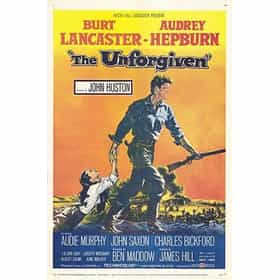 The Unforgiven is a 1960 American western film filmed in Durango, Mexico. It was directed by John Huston and stars Burt Lancaster, Audrey Hepburn, Audie Murphy, Charles Bickford and Lillian Gish. The story is based upon a novel by Alan Le May. The film, uncommonly for its time, spotlights the issue of racism against Native Americans and people believed to have Native American blood in the Old West. The movie is also known for problems behind the scenes. Huston often said this was his least satisfying movie. ... more on Wikipedia

The Unforgiven is ranked on...

The Unforgiven is also found on...

Audie Murphy Western Roles List of All Movies Released in 1960