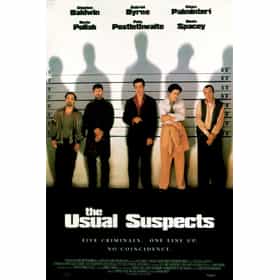 The Usual Suspects is a 1995 German-American neo-noir crime thriller film directed by Bryan Singer and written by Christopher McQuarrie. It stars Stephen Baldwin, Gabriel Byrne, Benicio del Toro, Kevin Pollak, Chazz Palminteri, Pete Postlethwaite and Kevin Spacey. The film follows the interrogation of Roger "Verbal" Kint, a small-time con man who is one of only two survivors of a fire on a ship docked at the Port of Los Angeles. He tells an interrogator a convoluted story about events that led him and his partners in crime to the boat, and about a mysterious mob boss known as Keyser Söze who commissioned their work. ... more on Wikipedia

lists about The Usual Suspects

The Usual Suspects is ranked on...

The Usual Suspects is also found on...