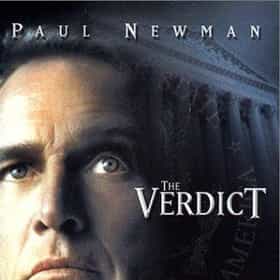 The Verdict is a 1982 courtroom drama film that tells the story of a down-on-his-luck alcoholic lawyer who takes a medical malpractice case to improve his own situation, but discovers along the way that he is doing the right thing. The lawsuit involves a woman in a persistent vegetative state and is thus reminiscent of the Karen Ann Quinlan case. The film stars Paul Newman, Charlotte Rampling, Jack Warden, James Mason, Milo O'Shea and Lindsay Crouse. Directed by Sidney Lumet, the film was adapted by David Mamet from the novel by Barry Reed and is not a remake of the 1946 film of the same name. The Verdict garnered critical acclaim and box office success. The film was nominated for five ... more on Wikipedia

The Verdict is ranked on...

The Verdict is also found on...