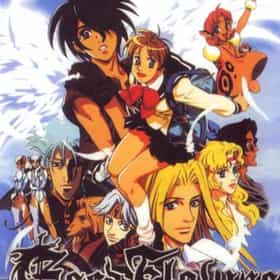 The Vision of Escaflowne

The Vision of Escaflowne is a 26-episode Japanese anime television series produced by Sunrise Studios and directed by Kazuki Akane. It premiered in Japan on April 2, 1996 on TV Tokyo, with the final episode airing on September 24, 1996. Sony's anime satellite channel, Animax also aired the series, both in Japan and on its various worldwide networks, including Hong Kong, Taiwan, Southeast Asia, and South Asia. The series is licensed for Region 1 release by Bandai Entertainment. The series follows a teenage high school girl named Hitomi, who finds herself pulled from Earth to the planet Gaea when a boy named Van appears on the high school track while battling a dragon. In Gaea, she is ... more on Wikipedia

The Vision of Escaflowne is ranked on...

#237 of 846 People who voted for The Vision of Escaflowne... People Age 30 to 49 are 2x more likely to vote for this also upvote Hellsing on The Best Adult Anime of All Time The Best Anime Series of All Time 5.9M VOTES You love anime but what tops this list of the best anime series ever made? Top anime series include shows like Death Note, A...
#73 of 130 People who voted for The Vision of Escaflowne... also upvote Code Geass on The Best Supernatural Anime also upvote Samurai Champloo on The Best Adult Anime of All Time The Best Fantasy Anime of All Time 394k VOTES From classics like Wolf's Rain to newer series like Sword Art Online, fantasy is one of the most popular genres of anime. Th...
#229 of 242 The Best Romance Anime Ever Made 845.7k VOTES It's time to get in touch with your emotional side, as we're ranking the top romance anime that has ever been made. These sh...
#211 of 315 The Best English Dubbed Anime of All Time 997.4k VOTES If you're one of those people who only watches anime in Japanese, we don't blame you. English dubs can really ruin a series ...
#34 of 70 The Best Sci-Fi Anime of All Time 63.1k VOTES Sci-fi geeks, we need you now more than ever! This is Ranker's list of the greatest sci-fi anime of all time, and we want ...
#13 of 20 The Best High Fantasy Anime 13.3k VOTES You might think that high fantasy is exclusive to Western media. You might be picturing Lord of the Rings, The Chronicles of...
#13 of 13 The 13 Best Isekai Romance Anime 14.9k VOTES Isekai - a genre in which a character is transported from one world to another, and must get used to life in a completely ne...
#22 of 25 The 25 Greatest Isekai Anime You Should Be Watching 209.2k VOTES Isekai is a genre of fantasy anime where a character travels from the world they know to an unfamiliar one. Typica...
#11 of 20 The Best Anime Like Full Metal Panic! 195 VOTES Based on the light novel series of the same name, Full Metal Panic! centers on a covert organization and a singular mission ...