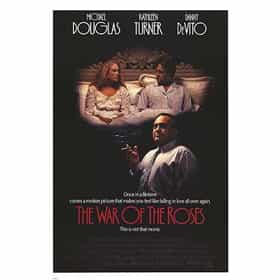 The War of the Roses

This film is a 1989 American black comedy film based upon the 1981 novel of the same name by Warren Adler. The film follows a wealthy couple with a seemingly perfect marriage. When their marriage begins to fall apart, material possessions become the center of an outrageous and bitter divorce battle. This is the third film to co-star Michael Douglas, Kathleen Turner, and Danny DeVito, after Romancing the Stone and its sequel, The Jewel of the Nile. DeVito directed the film, which also had producer James L. Brooks and actor Dan Castellaneta working on a project outside of The Simpsons. ... more on Wikipedia

The War of the Roses is ranked on...

The War of the Roses is also found on...