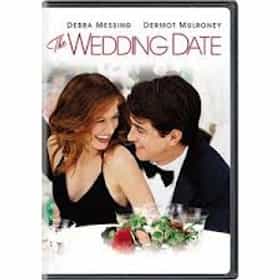 The Wedding Date is a 2005 American romantic comedy film directed by Clare Kilner and starring Debra Messing, Dermot Mulroney, and Amy Adams. Based on the novel Asking for Trouble by Elizabeth Young. The release was successful, achieving $47 million worldwide at the box office against a budget of $15 million, despite being panned by critics. It was remade in Bollywood as Aap Ki Khatir which also performed well at box office. ... more on Wikipedia

The Wedding Date is ranked on...

#4 of 40 The Worst Movies Released on Valentine's Day 1.2k VOTES The absolute worst movies ever released on Valentine’s Day, ranked by the Ranker community. This list has films that hit the...
#9 of 25 If Your Partner Suggests Any Of These Movies, They Want An Engagement Ring 315 VOTES Relationships can be tricky, especially when one half of the partnership is hearing wedding bells while the other is totally...
#25 of 90 The Best Wedding Movies 96k VOTES A list of the best wedding movies. These are films that feature engagements and getting married as a central theme. If you b...
#100 of 214 The Best Universal Studios Movies List 11.4k VOTES List of Universal Studios movies, ranked best to worst, including trailers, genres, and release dates. Universal Studios pro...
#70 of 375 The Greatest Romantic Comedies of All Time 191.2k VOTES Romantic comedy is one of the oldest and most popular film genres of all time. The term "romantic comedy" can refe...
#154 of 203 The Best PG-13 Comedies of All Time 83.1k VOTES Here is the list of PG-13 comedies, ranked from best to worst. These comedies are all rated PG-13, so if you're looking for ...
#16 of 42 The Best Romantic Comedies of the 2000s 3.9k VOTES These are the best 2000s romantic comedies, ranked from best to worst by user votes. Some of these great 2000s romantic come...
#104 of 209 The Best Romance Movies Rated PG-13 17.6k VOTES List of PG-13 romance movies, ranked from best to worst with movie trailers when available. Top romance movies can take us o...
#17 of 25 The Best Movies for Brides to Watch 351 VOTES If there's one thing all brides-to-be have in common, it's stress. However, try not to be too hard on all the Bridezill...
#31 of 40 The Best Movies for New Couples to Watch 885 VOTES The best movies for couples to watch early in a relationship need to be safe, enjoyable, and above all else, entertaining. W...
#22 of 39 The Best Amy Adams Movies 4.7k VOTES The best Amy Adams movies of all time prove that she’s one of the top actresses of her generation. Since the early 2000s, sh...
#1 of 61 The Best Dermot Mulroney Movies 1.8k VOTES List of the best Dermot Mulroney movies, ranked best to worst with movie trailers when available. Dermot Mulroney's highest ...
#10 of 50 The Best Romance Movies of 2004 639 VOTES List of the best 2004 romance movies, ranked by how many upvotes they've received by other fans of the genre. If watching me...
#1 of 15 The Best Debra Messing Movies 250 VOTES List of the best Debra Messing movies, ranked best to worst with movie trailers when available. Debra Messing's highest gros...
#13 of 28 The Best Romantic Movies Set in London 147 VOTES Romance might not be the first thing that comes to mind when you think of the city, but there have been some classic romanti...
#87 of 100 Movies Turning 15 In 2020 416 VOTES It's time to wish a happy birthday to all the movies turning 15 this year. Without a doubt, 2005 was an incredible year for ...
#48 of 70 The Best Chick Flicks From The 2000s 371 VOTES The decade that saw millennials into their teen years also put out some good chick flicks. This list of the best 2000s ...

The Wedding Date is also found on...