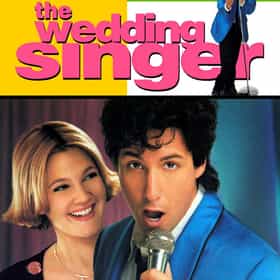 The Wedding Singer is a 1998 romantic comedy film written by Tim Herlihy and directed by Frank Coraci. It stars Adam Sandler as a wedding singer in the 1980s and Drew Barrymore as a waitress with whom he falls in love. The film was produced by Robert Simonds for $18 million and grossed $80.2 million in the United States and $123.3 million worldwide. The film was later adapted into a stage musical with the same title, debuting on Broadway in April 2006 and closing on New Year's Eve of that same year. ... more on Wikipedia

lists about The Wedding Singer

The Wedding Singer is ranked on...

#222 of 1,699 People who voted for The Wedding Singer... People under 30 are 2x more likely to vote for this The Most Rewatchable Movies 3.4M VOTES There are some movies that I always stop at and watch if I see them on TV or I can put in the DVD player and watch when I'm ...
#796 of 6,106 The Best Movies Of All Time 5.6M VOTES These are the best movies of all time, ranked by movie experts and film fans alike. What are the greatest movies in cinema h...
#99 of 1,007 The All-Time Greatest Comedy Films 424.7k VOTES The best comedy movies of all time are listed here, in one convenient list to be voted on and ranked by true fans. Thes...
#10 of 324 Movies with the Best Soundtracks 30.7k VOTES What movies have the best soundtracks? Director Quentin Tarantino once compared his movie soundtrack to "a kind of a pe...
#20 of 172 The Greatest Date Movies of All Time 63.5k VOTES What are the best date night movies? That's a tricky question, because you've got your first date movies and your second dat...
#15 of 107 The Funniest Movies Starring SNL Cast Members 3.7k VOTES Which comedies starring former SNL cast members are actually funny and worth watching? Since Saturday Night Live debute...
#12 of 51 Romantic Movies Your Girlfriend Forces You To Watch 2.2k VOTES Picking a movie for date night presents a bit of a struggle, especially if your girlfriend loves romantic flicks and yo...
#29 of 48 The Best Movies to Curl Up And Watch When You're Sick 28.4k VOTES You’re sick. We’re sorry. Instead of heading off to work or school, you’re stuck in bed with a bad case of the sniffles and ...
#3 of 35 The Greatest Band Cameos In Movie History 2.1k VOTES What are the greatest band cameos in movie history? Making a comprehensive list of all musicians who've graced the big scr...
#16 of 111 Movies That Turned 20 in 2018 3.2k VOTES Take a trip down memory lane with this list of movies turning 20 in 2018. Featuring epic war dramas, cult classics, wel...
#27 of 51 What to Watch If You Love 'The Goldbergs' 75 VOTES Wondering what to watch after The Goldbergs? If the family comedy has you hungry for more laughs about other peoples' f...
#16 of 378 The Greatest Romantic Comedies of All Time 193k VOTES Romantic comedy is one of the oldest and most popular film genres of all time. The term "romantic comedy" can refe...
#7 of 38 The Best Romantic Comedies of the '90s 6.7k VOTES Who doesn't need a good rom-com every once in a while? The perfect date night movie. The perfect girls night movie? These ar...
#19 of 91 The Best Wedding Movies 96.1k VOTES A list of the best wedding movies. These are films that feature engagements and getting married as a central theme. If you b...
#16 of 137 The Best Music Movies 8.9k VOTES A list of all the best music movies ever made, ranked by movie fans. This music movie list can be sorted by cast, year, dire...
#45 of 198 The Best New Line Cinema Movies List 2k VOTES List of New Line Cinema movies, ranked from best to worst, including trailers, genres, and release dates. New Line Cinema pr...
#12 of 20 20 Classic Rom-Coms Safe to Share with Your Kids 671 VOTES As your kids grow from children to tweens and teens, it's only natural their thoughts will turn to romance. Your kids w...
#25 of 40 The Best Comedy Movies for 13 Year Olds 472 VOTES The best comedy films for 13 year olds feature several of the funniest movies of all time. These hilarious romps take place ...
#8 of 40 The Best Movies for New Couples to Watch 895 VOTES The best movies for couples to watch early in a relationship need to be safe, enjoyable, and above all else, entertaining. W...
The Best 'F-Bombs' In PG-13 Movies 19.9k VIEWS Here's a thing you might not know about PG-13 movies: the MPAA allows only one F-bomb in the entire film. If you have two&nb...
#26 of 29 What to Watch If You Love Forgetting Sarah Marshall 200 VOTES Wondering what to watch after Forgetting Sarah Marshall? While the film was hilariously and shamelessly raunchy, it&nbs...
#3 of 37 The Best Movies About Breakups 3.4k VOTES There’s almost nothing that will make you feel better about being dumped or being, well single than watching a great movie a...
#6 of 46 The Best Jon Lovitz Movies 558 VOTES List of the best Jon Lovitz movies, ranked best to worst with movie trailers when available. Jon Lovitz's highest grossing m...

The Wedding Singer is also found on...

Romance Movies and Films List of All Movies Released in 1998