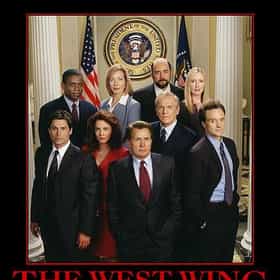 The West Wing is an American serial political drama television series created by Aaron Sorkin that was originally broadcast on NBC from September 22, 1999, to May 14, 2006. The series is set primarily in the West Wing of the White House, where the Oval Office and offices of presidential senior staff are located, during the fictional Democratic administration of Josiah Bartlet. The West Wing was produced by Warner Bros. Television. For the first four seasons, there were three executive producers: Aaron Sorkin; Thomas Schlamme; and John Wells. After Sorkin left the series, Wells assumed the role of head writer, with later executive producers being directors Alex Graves and Christopher ... more on Wikipedia

The West Wing is ranked on...

#42 of 802 People who voted for The West Wing... also upvote George Clooney on The Best Actors Working Today also upvote William H. Macy on The Best Actors Working Today The Best TV Shows To Binge Watch 1.3M VOTES Bored? Not anymore! These are the best TV shows for binge-watching. The greatest television shows in the world are ranked he...
#75 of 2,297 The Greatest TV Shows Of All Time 1.5M VOTES Choosing the best TV shows of all time means taking into account the best TV dramas, the best TV comedies, the best cartoons...
#65 of 383 People who voted for The West Wing... also upvote The Godfather Franchise on The Best Movies of All Time also upvote The Godfather on The Best Movies of All Time The Best TV Shows of The Last 20 Years 1.5M VOTES This best TV show list represents the combined opinions of thousands of TV fans. Anyone can vote on this list of the best TV...
#173 of 590 The Best TV Theme Songs of All Time 323.7k VOTES The best TV theme songs and TV intros of all time will take you back to some of the greatest moments in TV. Television theme...
#17 of 263 The Greatest TV Dramas of All Time 167.5k VOTES The greatest TV dramas of all time are the ones that make you feel connected to characters you will never meet in real life ...
#44 of 158 Shows with the Best Freakin' Series Finales of All Time 264.7k VOTES This list of the best series finales in television is a somber reminder that no matter how much you love a TV character or a...
#19 of 216 The TV Shows with the Best Writing 68.9k VOTES What are the best written TV shows of all time? The Writers Guild of America (WGA) and TV Guide recently compiled its list o...
#126 of 281 The Best Cult TV Shows of All Time 220.4k VOTES List of the best cult TV shows ever, ranked by their loyal fans. TV series that develop cult followings are known for their ...
#15 of 43 The Best '90s TV Dramas 10.5k VOTES The best ‘90s drama shows weighed heavily toward sci-fi premises, but gave equal time to angsty teen dramas and crime proced...
#11 of 14 14 Major Plotlines TV Shows Completely Abandoned 1k VOTES Television shows are a unique art form. They are rarely fully fleshed out when they first air, and the shows' writers, produ...
#12 of 15 15 TV Shows That Tried To Keep Going After Major Characters Took Off 42.5k VOTES Getting attached to characters in shows like Game of Thrones or The Walking Dead is a risk, because those series kill off ma...
#22 of 32 TV Shows That Probably Made You Cry at Least Once 33.7k VOTES We all have television shows that we love and are inordinately invested in. For Scandal fans, every Thursday night meant a w...
#31 of 154 The All-Time Greatest TV Pilots 231k VOTES The greatest TV pilots of all-time are single episodes of television that introduced us to what would soon be iconic charact...
#20 of 48 TV Shows That Actually Deserve A Revival 17.7k VOTES It's never easy to say goodbye to a beloved television show. Whether it was on the air for years and got a grand sendoff, or...
#18 of 123 Shows That Turned 20 in 2019 3.4k VOTES Take a trip down memory lane with this list of TV shows turning 20 in 2019. Featuring intense dramas, weird new game shows, ...
#7 of 41 What to Watch If You Love 'The Good Wife' 365 VOTES If you just finished The Good Wife and feel like it’s left a gaping hole in your life, there’s no need to despair. We’ve com...
#7 of 41 The Best Emmy Winning Dramatic Series 3.9k VOTES Each year, the big prize at the Primetime Emmys goes to the best drama series on television - the award for Outstanding Dram...
#18 of 20 The Best TV Road Trip Episodes Of All Time 200 VOTES What do the best TV road trips all have in common? They give viewers the chance to see the characters they know and love in ...
#17 of 356 People who voted for The West Wing... People over 50 are 2x more likely to vote for this The Best Streaming Netflix TV Shows 5.3M VOTES The best streaming Netflix TV shows include some great television dramas, sci-fi/adventure shows, sitcoms, and reality TV pr...
#119 of 476 The Best Television Shows of the 2000s 148.4k VOTES Some great TV shows came out of the 2000s, while some have even lived on. Here's a list of the best shows that aired from 20...
#11 of 25 The Best 1990s Legal TV Shows 722 VOTES These are the best 1990s legal TV shows, ranked from best to worst by user votes. The best 1990s legal TV shows found drama ...
#8 of 20 The Greatest TV Shows About Illness 113 VOTES Illness in all its various forms can often be an all-consuming feeling that is scarier and more alienating than anything els...
#31 of 31 The Greatest TV Shows About Depression 1.5k VOTES Depression can often be an all-consuming feeling that makes you feel totally alone in the world. Even so nearly everyone has...
#2 of 16 The Best 1990s Historical Drama Series 178 VOTES These are they best 1990s historical drama series, ranked from best to worst by user votes. From some good 1990s historical ...

The West Wing is also found on...