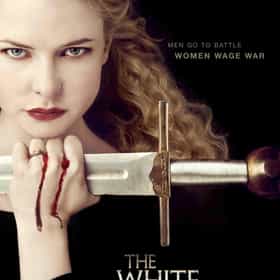 The White Queen is a British television drama series in ten parts, based on Philippa Gregory's historical novel series The Cousins' War. The first episode was premiered on BBC One on 16 June 2013 in the United Kingdom. It was first broadcast in the United States on Starz on 9 August 2013. Set against the backdrop of the Wars of the Roses, the series is the story of the women caught up in the protracted conflict for the throne of England. It starts in 1464—the nation has been at war for nine years fighting over who is the rightful King of England, as two sides of the same family, the House of York and the House of Lancaster, are in violent conflict over the throne. The story focuses on ... more on Wikipedia

The White Queen is ranked on...

#87 of 134 The Best of Premium Cable TV Series 187.9k VOTES Best cable series on premium cable includes some of the greatest TV shows in history. This list of premium cable original pr...
#160 of 400 TV Shows That Only Smart People Appreciate 1.2M VOTES Since about the early 2000s, TV audiences have been blessed with what many experts call The Golden Age of Television. In oth...
#3 of 11 Current TV Shows That Are Just Game of Thrones Ripoffs 539 VOTES Here's an extensive list of TV current tv shows trying to be Game of Thrones. While there...
#126 of 128 Canceled Shows We'd Most Like to See as Movies 204.8k VOTES This list of canceled shows we'd like to see as movies includes a lot of huge cult favorites. Obviously this list isn't comp...
#38 of 50 What to Watch If You Love 'Ray Donovan' 163 VOTES Wondering what to watch after Ray Donovan? If seasons of intense drama about fixing the crimes of powerful people in this se...
#14 of 48 What to Watch If You Love 'Outlander' 582 VOTES Outlander kept viewers on the edge of their seats with a harrowing tale of a woman who is thrust out of her own time, so it'...
#21 of 44 What to Watch If You Love 'Vikings' 294 VOTES Wondering what to watch after Vikings? If the epic fantasy historical fiction series has you hungry for more swords, axes, a...
#6 of 45 What to Watch If You Love 'The Crown' 354 VOTES The Crown is a brilliant series that looks at behind the scenes goings on within the reign of the longest-serving monarch in...
#6 of 44 What to Watch If You Love 'The Last Kingdom' 134 VOTES If you just finished The Last Kingdom and feel like it’s left a gaping hole in your life, there’s no need to despair. We’ve ...
#37 of 121 The Best TV Shows Based on Books 52.6k VOTES Fun fact: Game of Thrones isn't the only good TV show based on a book streaming on the airwaves! Though more and more people...
#15 of 116 The Best Historical Drama TV Shows 59.1k VOTES Learn about real-world history while you binge watch the best historical drama shows on television. Some of the greatest TV ...
#13 of 57 The Best British History Series & Period Pieces 2.9k VOTES Thanks to having a bit of a longer history than the United States, historical TV shows from the UK include everything from r...
#3 of 30 The Greatest TV Shows About Kings & Queens 4.8k VOTES One of the most fascinating, yet small, sects within society has always been the monarchy. While most Americans and European...
#25 of 48 The Best War Drama Series Ever Made 342 VOTES The best military and war drama shows offer stories about real, historical, battles. The best military drama series ever sho...
#5 of 33 The Greatest TV Shows Set in the Medieval Era 1k VOTES The Medieval era spans a whopping thousand years, from the 5th to the 15th century. Appropriately also called the Middle Age...
#9 of 30 The Best British War Series Ever Made 446 VOTES Due both to existing a bit longer than The States and often finding themselves physically in the middle of conflict, British...
#6 of 35 The Best Starz! TV Shows 8.2k VOTES This list of the top current and cancelled Starz! TV series includes the date when each show first aired, as well as which a...