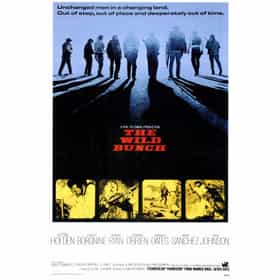 The Wild Bunch is a 1969 American epic Western film directed by Sam Peckinpah about an aging outlaw gang on the Texas–Mexico border, trying to exist in the changing "modern" world of 1913. The film was controversial because it's graphic and its portrayal of crude men attempting to survive by any available means. The movie, whose screenplay was written by Peckinpah and Walon Green, stars William Holden, Robert Ryan, Ernest Borgnine, Ben Johnson and Warren Oates. It was filmed in Mexico, notably at the Hacienda Ciénaga del Carmen and on the Rio Nazas. ... more on Wikipedia

The Wild Bunch is ranked on...

The Wild Bunch is also found on...