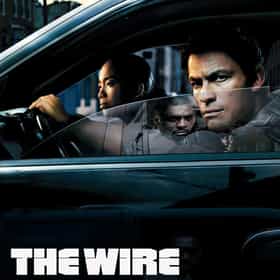 The Wire is an American drama television series set and produced in and around Baltimore, Maryland. Created and primarily written by author and former police reporter David Simon, the series was broadcast by the premium cable network HBO in the United States. The Wire premiered on June 2, 2002, and ended on March 9, 2008, comprising 60 episodes over five seasons. Each season of The Wire introduces a different institution in the city of Baltimore. ... more on Wikipedia

lists about The Wire

Deadwood
The Best Things Cast Members of The Wire Have Done Since the Genius Show Ended 571 votes When naming the best shows of all time, you'd be hard pressed to find one that can top The Wire. HBO's groundbreaking drama ...
What to Watch If You Love 'The Wire' 251 votes The Wire kept viewers on the edge of their seats with storylines intersecting the lives of members of the Baltimore Police D...
The Most Important Episodes Of 'The Wire' 143 votes HBO’s gritty crime drama The Wire rarely drew more than 4 million viewers and never won an Emmy. However, the greatest Wire ...
The Best of The WIRE Characters 13.6k votes One of the best shows ever to have been on TV, with possibly the strongest (and by far most diverse) cast of characters to...
The Best Seasons of 'The Wire' 1.3k votes The gripping crime drama The Wire aired five seasons from 2002 to 2008, telling stories about everything from the seasport s...

The Wire is ranked on...

The Wire is also found on...

The Best Lifetime Movies Ever Made