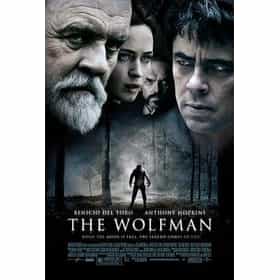 The Wolfman is a 2010 American horror film directed by Joe Johnston. It is a remake of the 1941 film of the same name, and tells the story of Lawrence Talbot who returns to his eerie English hometown of Blackmoor and a werewolf gets him. The film includes an ensemble cast featuring Benicio del Toro, Anthony Hopkins, Emily Blunt, Hugo Weaving, and Geraldine Chaplin. The screenplay was written by Andrew Kevin Walker and David Self with creature make-up effects by Rick Baker. Acclaimed director Mark Romanek was originally attached to direct the film with the idea to "...infuse a balance of cinema in a popcorn movie scenario." ... more on Wikipedia

The Wolfman is ranked on...

The Wolfman is also found on...