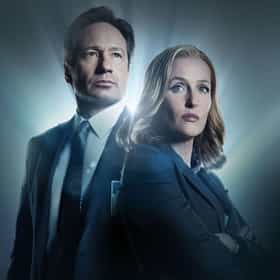 The X-Files is an American science fiction horror drama television series created by Chris Carter. The program originally aired from September 10, 1993 to May 19, 2002 on Fox, spanning nine seasons and 202 episodes. The series revolves around FBI special agents Fox Mulder and Dana Scully investigating X-Files: marginalized, unsolved cases involving paranormal phenomena. Mulder believes in the existence of aliens and the paranormal while Scully, a skeptic, is assigned to make scientific analyses of Mulder's discoveries to debunk his work and thus return him to mainstream cases. Early in the series, both agents become pawns in a larger conflict and come to trust only each other. They ... more on Wikipedia

Twin Peaks
All X-Files Episodes, Ranked Best to Worst 32k votes Spanning ten seasons, and over 208 episodes and counting, X-Files is arguably one of the best sci-fi television shows out th...
23 X-Files Storylines That Were Based on Real Life Stories 105.9k views There are plenty of questions about The X-Files we still want the answers to. Are aliens real? What about ghosts? Are flukem...
Things About 'The X-Files' Casual Fans Find Super Weird 2.4k views The X-Files has plenty of cool, gross, insightful, and outright disturbing episodes for dedicated fans to gush and theorize ...
Fan Theories About The X-Files 490 votes In the current era of deep state conspiracy theories and legitimate flying saucers, The X-Files has never felt more relevant...
The Most Important Episodes Of 'The X-Files' 1.6k votes Decades before TV viewers could stream series with complex, seasons-long, and bingeworthy narratives, Chris Carter's The X-F...
16 Episodes That Prove 'The X-Files' Is Secretly A Comedy 662 votes For casual fans of The X-Files, the show is all about aliens, conspiracy theories, and the nefarious Cigarette Smoking Man. ...
The Scariest Monsters On 'The X-Files,' Ranked 1.4k votes Throughout its run, The X-Files lured in viewers with conspiracy theories and scary monsters. Every week, FBI agents Dana Sc...
X-Files Storylines That Never Aired 594 votes The X-Files provided seven seasons of strange, eerie, and sometimes terrifying television, but what if some of the craziest ...
"Home" Was The 'X-Files' Episode So Controversial, It Was Banned For Years After Airing Once 128.7k views “Home” is a 1996 episode of The X-Files that finds agents Fox Mulder and Dana Scully working outside of their typical case t...
Ranking the Best Seasons of 'The X-Files' 236 votes This list features the best seasons of The X-Files, listed from best to worst with pictures of season posters when available...
What to Watch If You Love 'The X-Files' 130 votes The X-Files kept viewers on the edge of their seats with alien investigations and the paranormal, so it's no surprise that y...

The X-Files is ranked on...

The X-Files is also found on...