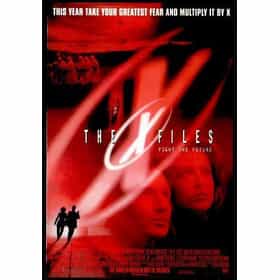 The X-Files is a 1998 American science fiction film written by Chris Carter and Frank Spotnitz, and directed by Rob Bowman. It is the first feature film based on The X-Files series created by Carter that revolves around fictional unsolved cases called the X-Files and the characters solving them. Four main characters from the television series appear in the film: David Duchovny, Gillian Anderson, Mitch Pileggi and William B. Davis reprise their respective roles as FBI agents Fox Mulder and Dana Scully, FBI Assistant Director Walter Skinner and the Cigarette-Smoking Man. The film's tagline and sub-title is Fight the Future. The story follows agents Mulder and Scully. ... more on Wikipedia

The X-Files is ranked on...

The X-Files is also found on...