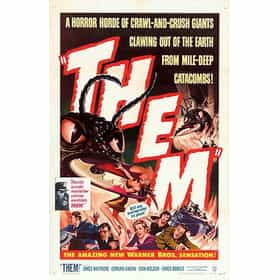 Them! is a 1954 American black-and-white science fiction film from Warner Bros. Pictures produced by David Weisbart, directed by Gordon Douglas, and starring James Whitmore, Edmund Gwenn, Joan Weldon, and James Arness. The film is based on an original story treatment by George Worthing Yates, which was then developed into a screenplay by Ted Sherdeman and Russell Hughes. Them! is the first of the 1950s "nuclear monster" movies, and the first "big bug" feature. A nest of gigantic irradiated ants is discovered in the New Mexico desert; they quickly become a national threat when it is discovered a young queen ant and her consorts have escaped to establish a new nest. ... more on Wikipedia