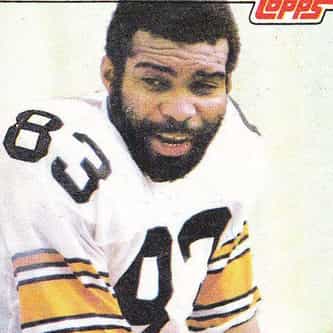 Theopolis Bell, Jr. (December 21, 1953 – June 21, 2006) was an American football wide receiver who played nine seasons in the National Football League for the Pittsburgh Steelers and the Tampa Bay Buccaneers. Bell, who was born and raised in Bakersfield, California, played college football at the University of Arizona and was selected in the fourth round of the 1976 NFL Draft by the Steelers. He was with the Steelers from 1976–80, earning Super Bowl rings in 1979 and 1980. He missed the ... more on Wikipedia

Theo Bell IS LISTED ON

#22 of 30
1.7k VOTES The Best Tampa Bay Buccaneers Wide Receivers of All Time
Famous People From Bakersfield Famous People Who Died in Florida