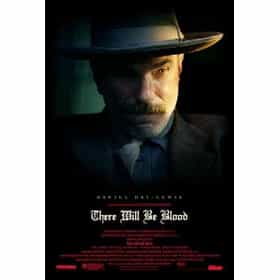 There Will Be Blood is a 2007 American epic drama film written and directed by Paul Thomas Anderson and starring Daniel Day-Lewis and Paul Dano. The film was inspired by Upton Sinclair's novel Oil! It tells the story of a silver miner-turned-oilman on a ruthless quest for wealth during Southern California's oil boom of the late 19th and early 20th centuries. The film received significant critical praise upon release as well as numerous award nominations and victories. It premiered at the Berlin International Film Festival, where it won the Silver Bear Award for Best Director and a Special Artistic Contribution Award for Jonny Greenwood's score. It also appeared on many critics' ... more on Wikipedia

There Will Be Blood is ranked on...

There Will Be Blood is also found on...