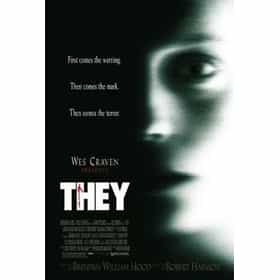 They is a 2002 American supernatural horror thriller film directed by Robert Harmon. The plot centers on a group of four adults named Julia Lund, Sam Burnside, Terry Alba, and Billy Parks and their experience with the phenomenon of night terrors and the impact they had on their lives as children and how they come back to haunt them as adults. The film was produced by Ted Field, Tom Engleman, and Wes Craven who served as executive producer. The film stars Laura Regan, Ethan Embry, Dagmara Dominczyk, Jay Brazeau, and Marc Blucas. ... more on Wikipedia

They is ranked on...

They is also found on...