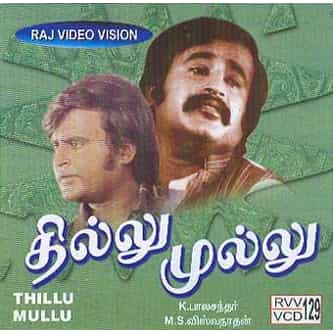 Thillu Mullu is a 1981 Tamil comedy film directed by K. Balachander. The film features Rajinikanth, Madhavi in lead roles while 'Thengai' Srinivasan, Nagesh, and Sowkar Janaki play supporting roles. The film was a remake of 1979 Hindi comedy film Gol Maal directed by Hrishikesh Mukherjee. Thillu Mullu was produced by Kalakendra Movies. The soundtrack and score were composed by M. S. Viswanathan while the lyrics for the tracks were written by Kannadasan. The film is about Chandran who is ... more on Wikipedia

Thillu Mullu IS LISTED ON