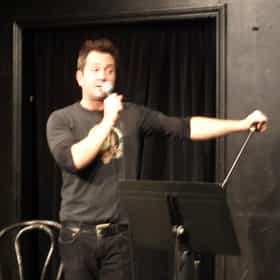 Thomas Patrick Lennon (born August 9, 1970) is an American actor, comedian, screenwriter, producer, director and novelist. As an actor he is best known for his work as a cast member on MTV's The State, for his role as Lieutenant Jim Dangle on the Comedy Central series Reno 911! and as Felix Unger on the CBS series The Odd Couple. Lennon is also an accomplished screenwriter of several major studio comedies with writing partner Robert Ben Garant. Their films include comedies such as the Night at the Museum films, The Pacifier, Balls of Fury, and Baywatch. ... more on Wikipedia

Thomas Lennon is ranked on...

#10 of 12 WWII World Leaders And The Actors Who Should Play Them In A Movie 3.5k VOTES There are few historical eras with as many movies about them as WWII. It was one of the bloodiest events in human histo...
#68 of 106 Who Is The Most Famous Tom/Thomas In The World? 912 VOTES How many celebrities named Tom can you think of? The famous Tommys below have many different professions, as this list inclu...
Every Single Celebrity Who Has Guest Starred on Drunk History 7.4k VIEWS Comedy Central's Drunk History has it all, from the boozy narration of notable historic moments to rotating cast members who...
#23 of 35 Celebrities We Want To See On Drop the Mic 3.2k VOTES Celebrities on Drop the Mic have to balance the funny and their flow. Some contestants are amazing freestyle rappers while o...
Celebrities You Didn't Know Have Vitiligo 486.9k VIEWS List of Celebrities with Vitiligo, loosely ranked by fame and popularity. Vitiligo is a condition that effects the pigments ...
The Internet Remembers Robin Williams RIP 18.4k VIEWS The cathartic outpouring of social media is usually a landscape to acknowledge the death of a beloved celebrity, but on the ...

Thomas Lennon is also found on...