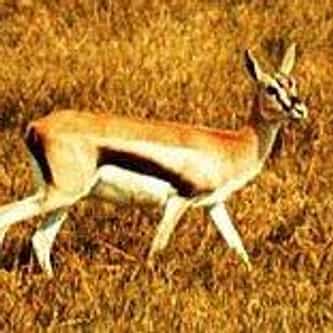 Thomson's gazelle (Eudorcas thomsonii) is one of the best-known gazelles. It is named after explorer Joseph Thomson and is sometimes referred to as a "tommie". It is considered by some to be a subspecies of the red-fronted gazelle and was formerly considered a member of the genus Gazella within the subgenus Eudorcas, before Eudorcas was elevated to genus status. Thomson's gazelles can be found in numbers exceeding 550,000 in Africa and are recognized as the most common type of ... more on Wikipedia

Thomson's Gazelle IS LISTED ON

28.8k VIEWS The Fastest Animals in the World

funny pregnancy pictures, birds you can eat, rare shark species, most interesting planet, famous people from houston, what age will you die based on your zodiac sign, justice society of america members, facts about immaculate conception, metallica san quentin, coachella past lineups