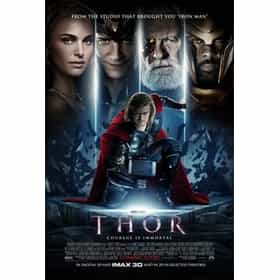 Thor is a 2011 American superhero film based on the Marvel Comics character of the same name, produced by Marvel Studios and distributed by Paramount Pictures. It is the fourth film in the Marvel Cinematic Universe. The film was directed by Kenneth Branagh, written by Ashley Edward Miller & Zack Stentz and Don Payne, and stars Chris Hemsworth, Natalie Portman, Tom Hiddleston, Stellan Skarsgård, Colm Feore, Ray Stevenson, Idris Elba, Kat Dennings, Rene Russo and Anthony Hopkins. The film sees Thor, the crown prince of Asgard, banished to Earth and stripped of his powers after he reignites a dormant war. As his brother, Loki, plots to take the throne for himself, Thor must ... more on Wikipedia

All The Easter Eggs Hidden In Thor: Ragnarok 11k votes Easter eggs in Marvel movies are almost as much fun as the movies themselves. True to form, there is no shortage of hidden t...
14 Reasons The 'Thor' Movies Are The Best Franchise In The MCU 460 votes WARNING: Contains spoilers for Avengers: Endgame and the Thor movies. After the events of Avengers: Endgame, Thor has prov...
The Best Hela Quotes 116 votes Here are the best Hela quotes from Thor: Ragnarok. Played by Cate Blanchett, Hela is the Asgardian Goddess of Death who beco...
The Best Korg Quotes 406 votes Here are the best Korg quotes from the Marvel Cinematic Universe. Voiced by Thor: Ragnarok director Taika Waititi, Korg is a...
All the Thor Movies in the MCU (And That Other One), Ranked 142 votes The first of Marvel’s Thor films came out in 2011 and delighted moviegoers with tales from the land of Asgard. All of these ...
The Best Characters In The Thor Movies 2.4k votes Comic book movie fans, we are ranking the greatest characters in the Thor movies in the Marvel Cinematic Universe. From 2011...
Thor: The Dark World Movie Quotes 158 votes Here are the best "Thor: The Dark World" quotes, following the action in the Marvel superhero action film. In &q...
18 Things The New Trailer Reveals About Thor: Ragnarok 1k votes How many times have you watched the Thor: Ragnarok trailer? If it’s less than 50, you ought to be ashamed of yourself. Yes, ...
Everything You Need To Know About Ragnarok Before Watching The New Thor Movie 1.6k views Thor: Ragnarok has hit theaters, leading casual fans everywhere to ask, "What does 'Ragnarok' mean?" The term come...

Thor Franchise is ranked on...