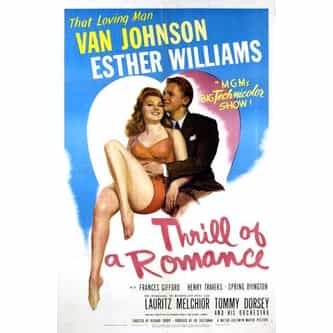 Thrill of a Romance

Thrill of a Romance was an American romance film released by Metro-Goldwyn-Mayer in 1945, starring Van Johnson, Esther Williams and Carleton G. Young, with musical performances by opera singer Lauritz Melchior . The film was directed by Richard Thorpe and written by Richard Connell and Gladys Lehman. The film tells the story of Cynthia Glenn, who, after a whirlwind romance, marries a rich businessman. However, on the first day of their honeymoon, her new husband is called away to ... more on Wikipedia

Thrill of a Romance IS LISTED ON