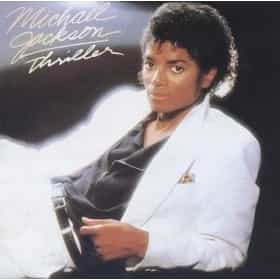 Thriller is the sixth studio album by the American recording artist Michael Jackson. It was released on November 30, 1982, by Epic Records, as the follow-up to Jackson's critically and commercially successful 1979 album Off the Wall. Thriller explores similar genres to those of Off the Wall, including pop, R&B, rock, post-disco, funk, and adult contemporary music. Recording sessions took place between April and November 1982 at Westlake Recording Studios in Los Angeles, California, with a production budget of $750,000, assisted by producer Quincy Jones. Of the album's nine tracks, four were written by Jackson. Seven singles were released from the album, all of which reached the top ... more on Wikipedia

Thriller is ranked on...

#337 of 337 The Worst Albums by Great Bands 52.4k VOTES Horrible music released by usually-great artists and bands. Sometimes even the most ingenious, original and creative musical...
#63 of 112 Albums You're Guaranteed To Find In Every Parent's CD Collection 64.2k VOTES Whether you're hanging at your best friend's house, taking a peek at your aunt's record collection, or rifling through the g...
#231 of 414 The Greatest Album Covers of All Time 164.6k VOTES Besides the music, some of the most iconic bands are known for their creative artwork. Often times this extends to their alb...
#4 of 15 The Best Halloween Songs for Kids 484 VOTES These are the all time greatest Halloween songs for kids. Halloween is a particularly fun time of year, when for a few momen...
#8 of 55 The Most Underrated Album of the Year Grammy Winners 12k VOTES Since 1959, only one album from each year can claim that it was bestowed with Album of the Year honors by the Grammys. While...

Thriller is also found on...