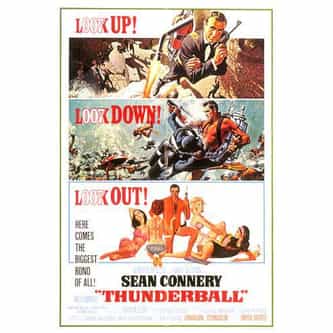 Tagline
Look Up! Look Down! Look Out! Here Comes The Biggest Bond Of All!

Sequel
You Only Live Twice

Thunderball is the fourth spy film in the James Bond series starring Sean Connery as the fictional MI6 agent James Bond. It is an adaptation of the novel of the same name by Ian Fleming, which in turn was based on an original screenplay by Jack Whittingham. It was directed by Terence Young with its screenplay by Richard Maibaum and John Hopkins. ... more on Wikipedia

Thunderball IS LISTED ON