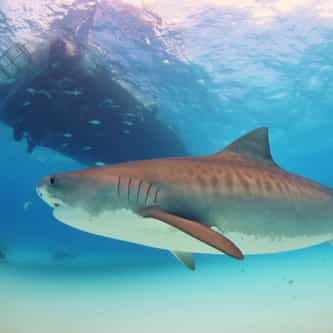 The tiger shark (Galeocerdo cuvier) is a species of requiem shark and the only extant member of the genus Galeocerdo. It is a large macropredator, capable of attaining a length over 5 m (16 ft 5 in). Populations are found in many tropical and temperate waters, especially around central Pacific islands. Its name derives from the dark stripes down its body, which resemble a tiger's pattern, but fade as the shark matures.The tiger shark is a solitary, mostly nocturnal hunter. It is notable ... more on Wikipedia

Tiger shark IS LISTED ON

#13 of 17
4.4k VOTES These Horrifying Animals From Thailand Will Make You Rethink That Beach Vacation
#1 of 10
10.4k VOTES The Scariest Types of Sharks in the World