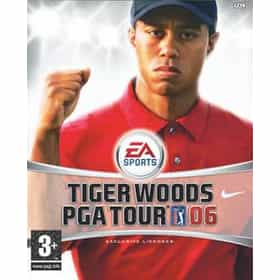 Tiger Woods PGA Tour 06 is a golf video game in the Tiger Woods PGA Tour series available for PlayStation Portable, PlayStation 2, Xbox, Xbox 360, GameCube, Mobile phones, and PC. The game features several types of play, including the development of golfers in a simulated PGA Tour environment. Among other things, the game also features a set of famous courses and players. Also it includes the Stroke Play, Match Play, and Skins Play among other numerous methods of play. It also includes the Four Ball, Best Ball, and Stableford modes of play. By being able to customize golfers and advancing that character through several stages the game allows a high level of identification with the ... more on Wikipedia

#89 of 105 The Best PSP Sports Games 2.4k VOTES If you owned a PSP at any time during your life, then it's safe to say there were probably a few sports games in your collec...
#18 of 32 The Best EA Sports Games List 1.8k VOTES List of the best EA Sports games with images, including any well-known EA Sports made games for any platform and console. Th...