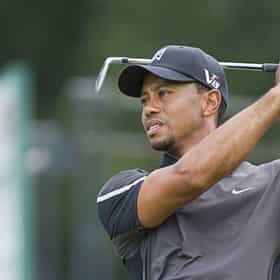 Eldrick Tont "Tiger" Woods (born December 30, 1975) is an American professional golfer. He ranks second all-time in both men's major championships and PGA Tour wins and also holds numerous golf records. Woods is widely regarded as one of the greatest golfers in the history of the sport, and as one of the most famous athletes of all time. Following an outstanding junior, college, and amateur golf career, Woods turned professional in 1996 at the age of 20. By the end of April 1997, he had won three PGA Tour events in addition to his first major, the 1997 Masters, which he won by 12 strokes in a record-breaking performance. He first reached the number one position in the world ... more on Wikipedia

Tiger Woods is ranked on...

Tiger Woods is also found on...