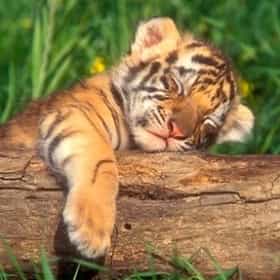 The tiger is the largest cat species, reaching a total body length of up to 3.38 m over curves and weighing up to 388.7 kg in the wild. Its most recognisable feature is a pattern of dark vertical stripes on reddish-orange fur with a lighter underside. The species is classified in the genus Panthera with the lion, leopard, jaguar and snow leopard. Tigers are apex predators, primarily preying on ungulates such as deer and bovids. They are territorial and generally solitary but social animals, often requiring large contiguous areas of habitat that support their prey requirements. This, coupled with the fact that they are indigenous to some of the more densely populated places on Earth, ... more on Wikipedia

Tiger is ranked on...

#1 of 120 Animals with the Cutest Babies 77.1k VOTES Adorable baby animals: Everyone loves them. But which young animals are actually the cutest? Bear cubs? Kittens? Puppies? Un...
#3 of 41 The Most Adorable Animal Parenting Moments 73.6k VOTES The cutest moments in animal parenting history involve mothers and fathers and their littly bitty mini-mes, out in the world...
#2 of 8 The Biggest and Best Big Cats 1.2k VOTES Cats are cute and all, but big cats are amazing and huge and could maul you with their claws and/or teeth. Big cats are seri...
#3 of 27 The Most Charismatic Megafauna 1.4k VOTES Megafauna. Charismatic megafauna. What are they even? They are elephants and pandas and lots of other popular animals that p...
10 Times Animals Attacked People Trying To Poach Them 12.5k VIEWS Is there anything more ironic than a poacher being killed by their targets? All over the world, poachers are illegally hunti...