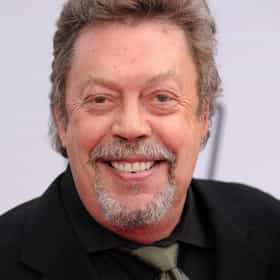 Timothy James Curry (born 19 April 1946) is an English actor, voice artist, comedian and singer. He is best known for working in a diverse range of theatre, film, and television, most often portraying villainous characters. Curry rose to prominence with his portrayal of Dr. Frank-N-Furter in The Rocky Horror Picture Show (1975), reprising the role he had originated in the 1973 London, and the 1974 Los Angeles, stage productions of The Rocky Horror Show. His other stage work includes various roles in the original West End production of Hair, Wolfgang Amadeus Mozart in the 1980 Broadway production of Amadeus, the Pirate King in the 1982 West End production of The Pirates of Penzance, ... more on Wikipedia

The Best Tim Curry Movies 21.5k votes List of the best Tim Curry movies, ranked best to worst with movie trailers when available. Tim Curry's highest grossing mov...
Which Tim Curry Character Are You, Based On Your Zodiac Sign? 150.7k views Tim Curry has played an eclectic collection of personalities throughout his career. He first won viewers' hearts as the swee...

Tim Curry is ranked on...

#175 of 1,148 People who voted for Tim Curry... also upvote Star Wars Franchise on The Most Rewatchable Movies The Best Actors in Film History 2.2M VOTES The best actors ever are ranked here in this list of the best actors in film history. These are the greatest actors ever to ...
#38 of 115 The Best English Actors of All Time 79.1k VOTES Some of the best actors of all time hail from England, and whether you love these English men for their acting talents or ju...
#290 of 2,003 People who voted for Tim Curry... also upvote Harry Potter Franchise on The Best Movies of All Time also upvote Harry Potter Franchise on The Most Rewatchable Movies The Greatest Actors & Actresses in Entertainment History 1.7M VOTES The best actors and actresses of all time, male and female, ranked by film fans worldwide. This list of greatest actors and ...
#45 of 150 People who voted for Tim Curry... People on the West Coast are 2x more likely to vote for this The Best Animated Voiceover Performances 143.2k VOTES This list contains information about the best animated voiceover performances in film, ranked by your votes. Several famous ...
#74 of 128 Celebrities You'd Let Babysit Your Kid 67.4k VOTES Parents need to be extra careful when choosing a babysitter for your children, and picking a celebrity babysitter invol...
#293 of 313 Famous People Most Likely to Live to 100 13.5k VOTES Sometimes, age really is just a number. But these healthy old celebrities seem to be defying time like no others. These clas...
#67 of 118 The All-Time Best Voice Actors 7.6k VOTES These are voices you could never put a face to, but you know them as well as you know any actor. Deep voices, squeaky voices...
#191 of 255 Actors You Would Watch Read the Phone Book 317.9k VOTES List of actors who you would watch do something as mundane as read the phone book. Some of these guys are leading men, consi...
#5 of 27 The Best Actors And Actresses Whose Whole Thing Is Their Voice 14.8k VOTES More than a few of Hollywood's most renowned actors achieved fame, in part, because of their distinctive voices. James ...
#4 of 16 Actors’ And Actresses’ Signature On-Screen Moves 630 VOTES Becoming a movie star is a strange, mysterious process, achieved through equal parts talent, luck, and hard work. ...
#15 of 17 You'll Never Watch Horror Movies The Same Way After Seeing These Iconic Villains Without Makeup 76.3k VOTES Some famous horror actors are only known to the public by the face they wear on screen. Whether they're hiding behind a hock...
#161 of 868 People who voted for Tim Curry... People in the Northeast are 2x more likely to vote for this Celebrity Death Pool 2016 370.1k VOTES Celebrity death pool 2016: Here's a large list of celebrities we think just might die this year. The only certainties in l...
#2 of 17 17 Famous Actors Who Almost Played the Joker 5.8k VOTES In every superhero movie, villains seem to have the most fun. And no villain has more fun that Batman’s arch nemesis the J...
Actors Talk About The Worst Prosthetics And Makeup They Had To Wear 264.6k VIEWS Many films may rely on CGI to do a lot of heavy lifting when it comes to visual effects, but nothing can top the look of phy...
Every Person Who Has Hosted 'Saturday Night Live' 49.6k VIEWS Live from New York! It's Saturday Night! This is a list of all Saturday Night Live hosts, in reverse order,...
#55 of 70 The 40+ Greatest Baritone Singers in Music History 43k VOTES Baritone singers have a gift of resonance in lower ranges, between the bass and the tenor voices. A baritone's voice is ofte...
Famous People Who Voiced Cartoon Characters 4.8M VIEWS   Everyone knows that Walt Disney, Mel Blanc, and Dan Castellaneta have provided the voices to iconic cartoon charact...
80 Famous Military Brats 229.1k VIEWS List of Famous Military Brats ranked by fame and popularity. A military brat is a nickname used to describe the children of ...
50+ Famous Actors Who Are Aries 31 VIEWS Aries are passionate, bold, and ambitious, so it should come as no surprise that the below famous actors fall under that zod...

Tim Curry is also found on...