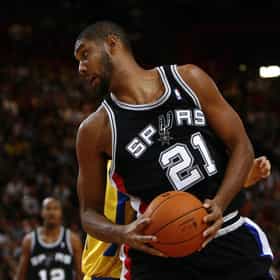 Timothy Theodore Duncan (born April 25, 1976) is an American professional basketball coach and former player who is an assistant coach for the San Antonio Spurs of the National Basketball Association (NBA) He spent his entire 19-year playing career (1997–2016) with the Spurs. Duncan started out as an aspiring swimmer and did not begin playing basketball until ninth grade when Hurricane Hugo destroyed the only available Olympic-sized pool in his homeland of Saint Croix, U.S. Virgin Islands. In high school, he played basketball for St. Dunstan's Episcopal. In college, Duncan played for the Wake Forest Demon Deacons, and in his senior year, he earned the John Wooden Award as well as ... more on Wikipedia

Tim Duncan is ranked on...

Tim Duncan is also found on...