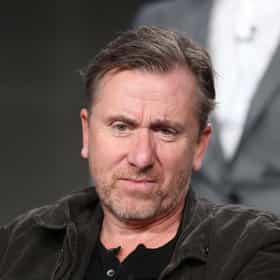 Timothy Simon Roth (born 14 May 1961) is an English actor and director. He made his debut in the television film Made in Britain (1982). He gained critical acclaim for his role as Myron in The Hit (1984), for which he was nominated for the BAFTA Award for Most Promising Newcomer. Among a group of prominent British actors of the era, the "Brit Pack", Roth gained more attention for his performances in The Cook, the Thief, His Wife & Her Lover (1989), Vincent & Theo (1990) and Rosencrantz & Guildenstern Are Dead (1990). He later earned international recognition for appearing in Quentin Tarantino's films, such as Reservoir Dogs (1992), Pulp Fiction (1994), Four Rooms ... more on Wikipedia

Tim Roth is ranked on...

#69 of 329 The Greatest Actors Who Have Never Won an Oscar (for Acting) 468.1k VOTES There are many actors who haven't won an Oscar. For 95 percent of the acting population, there is probably a good reason the...
#177 of 1,145 The Best Actors in Film History 2.2M VOTES The best actors ever are ranked here in this list of the best actors in film history. These are the greatest actors ever to ...
#103 of 273 The Greatest British Actors of All Time 289.4k VOTES This list of the greatest British actors of all time has been ranked by fans of the films and TV shows in which these men ha...
#117 of 282 People who voted for Tim Roth... also upvote Star Wars Franchise on The Best Movies of All Time also upvote Lord of the Rings Franchise on The Best Movies of All Time The Best (Male) Actors Working Today 1.5M VOTES The best actors working today include Hollywood legends, Academy Award winners and many of the top up and coming actors in t...
#43 of 258 The Best Marvel Movie Actors Ever 631.6k VOTES Ah Marvel movies. It began in 1944 with serialized films of Captain America and 70 years later, are one of the biggest, most...
#121 of 129 Celebrities You'd Let Babysit Your Kid 67.8k VOTES Parents need to be extra careful when choosing a babysitter for your children, and picking a celebrity babysitter invol...
#15 of 115 The Best Short Actors 51.6k VOTES Who are the best short actors? Some of the incredibly famous actors on this list are surprisingly diminutive, coming in at 5...
#50 of 56 The Best Marvel Superhero Movie Actors 102.9k VOTES Comic book movies are especially hard to cast because there are so many die hard fans of these characters who see them all t...
#3 of 14 Who Would Quentin Tarantino Cast In A Rebooted 'Star Trek'? 871 VOTES It's an exciting time to be a Star Trek fan, what with Discovery wowing audiences weekly and the upcomin...
Filmmakers and Actors Who Apologized for Their Movies 29.8k VIEWS Considering how many movies get made across the globe each year, there are surprisingly few directors, actors, and screenwri...
19 Actors Who Were Incredibly Close To Playing Harry Potter Characters 45.9k VIEWS Believe it or not, there actually were some British people who weren't in Harry Potter. Behind-the-scenes stories are shared...
You Probably Didn't Know It, But These Brave Celebrities Are Rape Survivors 2.1M VIEWS There are 237,868 victims of sexual assault or rape in the United States every year. Several celebrities have had the misf...
Famous People Named Timothy 36.6k VIEWS List of famous people named Timothy, along with photos. How many celebrities named Tim can you think of? The famous Timothys...
Male Celebrities Who Are 5’7" 23.2k VIEWS This list contains examples of male celebs who are 5'7" loosely ranked by fame and popularity. Only a couple of inches ...

Tim Roth is also found on...