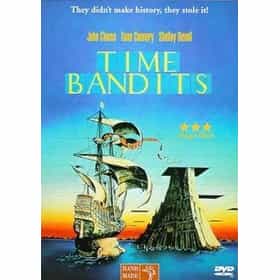 Time Bandits is a 1981 British fantasy film co-written, produced, and directed by Terry Gilliam, and starring Sean Connery, John Cleese, Shelley Duvall, Ralph Richardson, Katherine Helmond, Ian Holm, Michael Palin, David Warner, and Craig Warnock. Gilliam has referred to Time Bandits as the first in his "Trilogy of Imagination", followed by Brazil and ending with The Adventures of Baron Munchausen. All are about the "craziness of our awkwardly ordered society and the desire to escape it through whatever means possible." All three films focus on these struggles and attempts to escape them through imagination: Time Bandits, through the eyes of a child, Brazil, through ... more on Wikipedia

Time Bandits is ranked on...

Time Bandits is also found on...