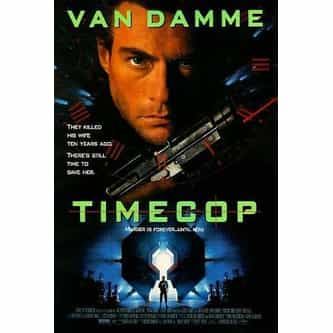 Tagline
Turn back the clock
and you're history.
They killed his wife ten years ago. There's still time to save her. Murder is forever... until now.

Timecop is a 1994 science fiction action film directed by Peter Hyams and co-written by Mike Richardson and Mark Verheiden. Richardson also served as executive producer. The film is based on Time Cop, a story written by Verheiden and drawn by Phil Hester and Chris Warner which appeared in the anthology comic Dark Horse Comics, published by Dark Horse Comics. The film stars Jean-Claude Van Damme as a police officer in 1994 and a U.S. Federal agent in 2004, when time travel has been made ... more on Wikipedia

Timecop IS LISTED ON