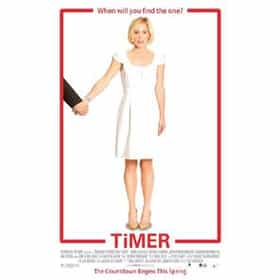 TiMER is a 2009 film directed by Jac Schaeffer. "In the near future, Internet dating sites are a thing of the past thanks to TiMER, a small digital counter implanted on the wrist. It accurately displays the number of days the wearer has until they meet their soulmate, except for Oona O’Leary (Emma Caufield from Buffy), whose TiMER remains blank, while her biological clock keeps on ticking. After many unsuccessful attempts to capture TiMER-less men and get them to sign up to the programme, she meets Mikey a charming young supermarket clerk and slacker musician whose TiMER already shows four months. Desperate times call for desperate measures and they start a slightly hedonistic ... more on Wikipedia

TiMER is ranked on...

TiMER is also found on...