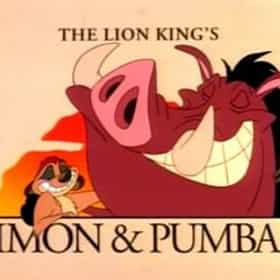 The Lion King's Timon & Pumbaa, often simply referred to as Timon & Pumbaa, is an American animated television series made by The Walt Disney Company. It centers on Timon the meerkat and Pumbaa the warthog from the 1994 Disney film The Lion King, without most of the other characters in the franchise. The show ran for three seasons from September 8, 1995 to September 24, 1999. It is also the first Lion King related media to show humans, as humans were not present in the movie. It is one of two television series to be based on the film, the second being The Lion Guard. ... more on Wikipedia

Timon & Pumbaa is ranked on...

Timon & Pumbaa is also found on...