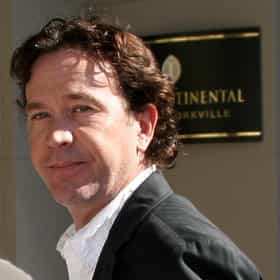 Timothy Tarquin Hutton (born August 16, 1960) is an American actor and director. He is the youngest recipient in the Best Supporting Actor Category of the Academy Awards. He won at the age of 20 for his performance as Conrad Jarrett in Ordinary People (1980). Hutton has since appeared regularly in feature films and on television, with featured roles in the drama Taps (1981), the spy film The Falcon and the Snowman (1985), and the horror film The Dark Half (1993), among others. Between 2000 and 2002, Hutton starred as Archie Goodwin in the A&E drama series A Nero Wolfe Mystery. Between 2008 and 2012, he starred as Nathan "Nate" Ford on the TNT drama series Leverage. ... more on Wikipedia

Timothy Hutton is ranked on...

#648 of 1,151 The Best Actors in Film History 2.2M VOTES The best actors ever are ranked here in this list of the best actors in film history. These are the greatest actors ever to ...
#177 of 179 The Best Living American Actors 265.3k VOTES It takes a lot to make a movie great. There has to be excellent writing, production, direction, editing, and of course, acti...
#179 of 195 The Best American Actors Working Today 159.7k VOTES There have been plenty of great American actors throughout film history, but which are the greatest working today? This list...
#98 of 122 The Worst Oscar-Winning Actors Ever 229k VOTES Bad actors who have won Oscars, in any category, as determined by the votes and selections of Ranker users. This list contai...
#1 of 14 Weird Things Academy Award Winning Actors Have Done With Their Oscar Statues 1k VOTES Where do actors keep their Oscar statues after winning them? As winning an Oscar is the highest honor you can achieve i...
#8 of 18 The Best Actors Who Won Oscars for Their First Movie 2.8k VOTES Has anyone won an Oscar for their first film role? Winning an Academy Award is a huge lifetime achievement. It's hard enough...
Here's Where You've Seen Everyone In 'The Haunting Of Hill House' Before 60.9k VIEWS The Haunting of Hill House, a modern take on the eponymous Shirley Jackson novel, has officially become a classic. The 2018 ...
Famous People Named Timothy 35.1k VIEWS List of famous people named Timothy, along with photos. How many celebrities named Tim can you think of? The famous Timothys...
Angelina Jolie's Loves & Hookups 436.5k VIEWS Who is Angelina Jolie dating? Who Angelina Jolie dated; list of Angelina Jolie loves, ex boyfriends; breakup rumors. Fans wi...
Demi Moore's Loves & Hookups 67.6k VIEWS Who is Demi Moore dating? Who Demi Moore dated; list of Demi Moore loves, ex boyfriends; breakup rumors. The loves, exes, re...
Celebrities Who Own Nightclubs 33.5k VIEWS List of celebrities who own nightclubs, loosely ranked by fame and popularity. It's no secret that celebrities like to party...

Timothy Hutton is also found on...