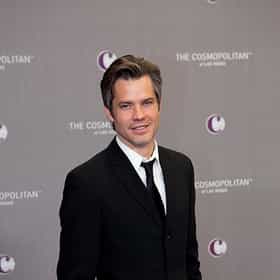 Timothy David Olyphant (; AHL-ə-fint; born May 20, 1968) is an American actor and producer. He made his acting debut in an Off-Broadway theater in 1995, in The Monogamist, and won the Theatre World Award for his performance, and then originated David Sedaris' The Santaland Diaries in 1996. He then branched out to film; in the early years of his career, he was often cast in supporting villainous roles, most notably in Scream 2 (1997), Go (1999), A Man Apart (2003) and The Girl Next Door (2004). He came to the attention of a wider audience with his portrayal of Sheriff Seth Bullock in HBO's western Deadwood (2004–2006) and its film continuation Deadwood: The Movie (2019). He had starring ... more on Wikipedia

Timothy Olyphant is ranked on...

#86 of 194 The Hottest Men Over 40 1.1M VOTES The hottest men in Hollywood? Turns out, the older they get, the more we like them! Like fine wines, tweens, and your favori...
#402 of 1,151 The Best Actors in Film History 2.2M VOTES The best actors ever are ranked here in this list of the best actors in film history. These are the greatest actors ever to ...
#257 of 337 The Coolest Actors Ever 735.2k VOTES As movie fans, we like to think of our favorite actors as being larger than life. With all of the coverage that these stars ...
#777 of 2,003 The Greatest Actors & Actresses in Entertainment History 1.7M VOTES The best actors and actresses of all time, male and female, ranked by film fans worldwide. This list of greatest actors and ...
#239 of 440 The Hottest Male Celebrities 3.4M VOTES You love your boyfriend (husband? Lucky you!), but then there are these hot celebrity men. You see them and then you maybe f...
#49 of 91 The Hottest Silver Foxes 71.6k VOTES Silver foxes are among the sexiest older men on the planet. A bit of gray streaked into a full head of hair on a man with we...
#84 of 179 The Best Living American Actors 265.1k VOTES It takes a lot to make a movie great. There has to be excellent writing, production, direction, editing, and of course, acti...
#98 of 505 The Best TV Actors of All Time 107.1k VOTES The greatest TV actors of all time. Some of these actors have been in movies, some of them are even more well known at this ...
#176 of 255 People who voted for Timothy Olyphant... People on the West Coast are 2x more likely to vote for this Actors You Would Watch Read the Phone Book 315.5k VOTES List of actors who you would watch do something as mundane as read the phone book. Some of these guys are leading men, consi...
#31 of 53 Actors Who Almost Got the Part in a Marvel Film 54.2k VOTES Casting is truly an art form. Each and every cast member from starring, to supporting, to day-player affects the entire tone...
#22 of 41 Who Should Replace Ben Affleck As Batman? 19.1k VOTES Who can play Batman? Lots of actors can play Bruce Wayne and his alter ego, and a whole bunch have actually done so, from Ad...
#7 of 9 'Once Upon a Time in Hollywood' Actors Vs. The Real People They're Playing 8.5k VOTES The "time" in Quentin Tarantino's 2019 film Once Upon a Time... In Hollywood is 1969. The director ...
#19 of 30 Hot Celebrity Guys in Cowboy Hats 10.8k VOTES The hottest male celebrities on the planet can pretty much roll out of bed in the morning and make women swoon, but the...
#19 of 30 Who Should Play The Next Green Lantern? 12.7k VOTES The first Green Lantern has been around since 1940. Outside of comics, we saw him in cartoons and video games, but it wasn't...
#8 of 75 The Best WTF With Marc Maron Podcast Episodes Of 2019 49 VOTES Since Marc Maron's first episode of WTF in 2009, his podcast has touched on a deep and broad range of topics that varies wit...
Celebrities Who Married Their College Sweethearts 1.1M VIEWS We all want to believe in true love and fairy-tale endings, but relationships aren't always as romantic as they are in the m...
Famous People Named Timothy 35.1k VIEWS List of famous people named Timothy, along with photos. How many celebrities named Tim can you think of? The famous Timothys...
17 People You Forgot Guest Starred on The Office 45.7k VIEWS Guest stars on The Office weren't an uncommon occurrence. The show went on for a whopping nine seasons (201 episodes), so th...
Actors Who Were THIS CLOSE to Playing Superheroes 2M VIEWS We’re sure that some people think that it’s easy to slap together a superhero movie, but a good movie, especially a good sup...
25 Celebrities Who Were on the Swim Team 49.1k VIEWS Celebrities who were on school swim teams all later became famous in the world of television, music, movies, or modeling, am...

Timothy Olyphant is also found on...