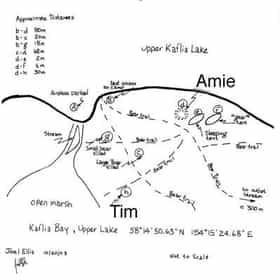 Timothy Treadwell (born Timothy William Dexter; April 29, 1957 – October 5, 2003) was an American bear enthusiast, environmentalist, and documentary filmmaker and founder of the bear-protection organization Grizzly People. He lived among grizzly bears of Katmai National Park in Alaska for 13 summers. At the end of his 13th summer in the park, in 2003, he and his girlfriend Amie Huguenard were killed and almost fully eaten by a 28-year-old brown bear, whose stomach was later found to contain human remains and clothing. Treadwell's life, work, and death were the subject of Werner Herzog's critically acclaimed documentary film Grizzly Man (2005). ... more on Wikipedia

Everything That Had To Go Wrong For 'Grizzly Man' Timothy Treadwell To Meet His Fate 35.5k views "What haunts me is that in all the faces of all the bears that Treadwell ever filmed I discover no kinship, no understa...
The Strange Life And Tragic Death Of Grizzly Man, Timothy Treadwell 111.9k views Timothy Treadwell, the Grizzly Man who spent 13 summers living with the bears, was part activist, part actor, and mostly mys...

Timothy Treadwell is ranked on...

Bizarre Deaths Of The 21st Century 328.4k VIEWS Ready to be creeped out? Here are some very strange deaths that have occurred during the 21st century. The following list in...

Timothy Treadwell is also found on...