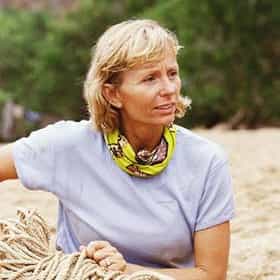 Tina Marie Wesson is an American nurse, motivational speaker, and reality TV personality who won $1,000,000 as the winner of the second season of Survivor, on Survivor: The Australian Outback in 2001. Wesson returned in 2004 for Survivor: All-Stars, where she was the first person voted off the show. After her appearances on the show, Wesson began teaching occasional outdoor survival classes. Wesson returned as a contestant on the show's 27th season, Survivor: Blood vs. Water with her daughter, Katie Collins. Her daughter finished in eighth place while Wesson ended the season in fourth place. ... more on Wikipedia

Tina Wesson is ranked on...

Tina Wesson is also found on...