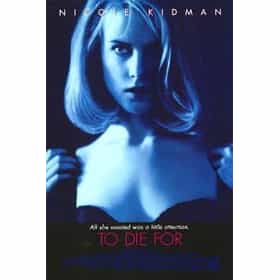 This film is a 1995 American comedy-drama film, made in a mockumentary format, directed by Gus Van Sant and written by Buck Henry, based on the novel of the same name by Joyce Maynard, which in turn was based on the factual story of Pamela Smart. It stars Nicole Kidman, Matt Dillon, and Joaquin Phoenix. Major supporting roles feature Illeana Douglas, Wayne Knight, Casey Affleck, Kurtwood Smith, Dan Hedaya, and Alison Folland. Kidman was nominated for a BAFTA and won a Golden Globe Award and a Best Actress Award at the 1st Empire Awards for her performance. ... more on Wikipedia

To Die For is also found on...