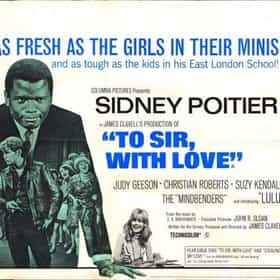 To Sir, with Love

To Sir, with Love is a 1967 British drama film, starring Sidney Poitier, that deals with social and racial issues in an inner-city school. James Clavell directed and wrote the film's screenplay, based on E. R. Braithwaite's semi-autobiographical novel To Sir, With Love. The film's title song "To Sir With Love", sung by Lulu, reached number one on the U.S. pop charts for five weeks in the autumn of 1967 and ultimately was Billboard magazine's No. 1 pop single for that year. The movie ranked number 27 on Entertainment Weekly's list of the 50 Best High School Movies. A made-for-television sequel, To Sir, with Love II, was released nearly three decades later, with Poitier ... more on Wikipedia

#475 of 722 The Best Black Movies Ever Made, Ranked 665.9k VOTES The best black movies are favorites that explore African-American culture and themes. This list is ranked by film fans, many...
#53 of 302 The Greatest Soundtracks of All Time 138.4k VOTES The best soundtracks ever are more than just a collection of songs in a particular order; they evoke and accentuates th...
#328 of 465 The Best Feel-Good Movies 436.6k VOTES Want to feel warm and fuzzy inside? This is a ranked list of the best feel-good movies that make us experience all the good ...
#16 of 127 The Best Movies of 1967 3.9k VOTES List of the best movies of 1967, with movie trailers when available. 1967 is considered to be one of the most historic yea...
#1 of 51 The Best Sidney Poitier Movies 2.5k VOTES List of the best Sidney Poitier movies, ranked best to worst with movie trailers when available. Sidney Poitier's highest gr...
#84 of 422 The Best Columbia Pictures Movies 9.1k VOTES List of Columbia Pictures movies, ranked best to worst, including trailers, genres, and release dates. Columbia Pictures pro...
#7 of 54 The Best Movies For and About Teachers, Ranked 3.2k VOTES A list of the best teacher movies. These are films that focus on teachers, teaching, and the conflicts our educators often g...

To Sir, with Love is also found on...