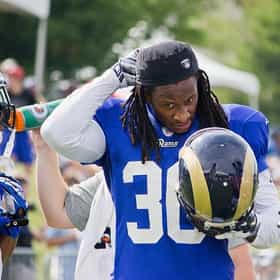 Todd Jerome Gurley II (born August 3, 1994) is an American football running back for the Los Angeles Rams of the National Football League (NFL). He played college football at Georgia where he earned All-SEC honors in 2012 and 2013. Gurley was drafted by the St. Louis Rams with the tenth overall pick in the 2015 NFL Draft. Despite missing three games due to a torn ACL suffered during his junior year at Georgia, Gurley rushed for 1,106 yards in his rookie season and was voted Offensive Rookie of the Year by the Associated Press. He was named NFL Offensive Player of the Year by the Associated Press following the 2017 season after gaining 19 offensive touchdowns. ... more on Wikipedia

Todd Gurley is ranked on...