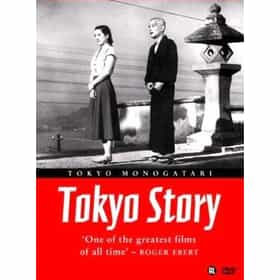 Tokyo Story is a 1953 Japanese film directed by Yasujirō Ozu. It tells the story of an aging couple who travel to Tokyo to visit their grown children. The film contrasts the behavior of their children, who are too busy to pay them much attention, and their widowed daughter-in-law, who treats them with kindness. It is often regarded as Ozu's masterpiece, and has appeared several times in the British Film Institute lists of the greatest films ever made. ... more on Wikipedia

Tokyo Story is ranked on...

#222 of 291 The Top Tearjerker Movies That Make Men Cry 212.8k VOTES Some classic, well-loved films are classified tearjerkers, but would all sad, depressing movies make the manliest men cry? N...
#866 of 6,104 People who voted for Tokyo Story... People outside of the US are 2x more likely to vote for this are 4x more likely to vote for The Godfather Franchise on this list The Best Movies of All Time 5.6M VOTES These are the best movies of all time, ranked by movie experts and film fans alike. What are the greatest movies of all time...
#258 of 710 The Best Movies Roger Ebert Gave Four Stars 160.2k VOTES List of movies Roger Ebert gave four stars, ranked best to eh. This is NOT a complete list of all of Roger Ebert's four star...
#36 of 133 The Greatest Movies in World Cinema History 6.2k VOTES Hollywood may be the epicenter of the movie business, but many of the best films released each year hail from all over the w...
#22 of 31 The Best Movies About Dysfunctional Families 745 VOTES There's nothing quite as dramatic as family. Complicated mother/daughter relationships, argumentative siblings, and estran...
#18 of 27 The Best Movies About Old People 275 VOTES A lifetime's worth of experiences influence the dynamic characters in movies about getting old. The best movies about old ...
#112 of 788 The Best Movies of 1953 6k VOTES List of the best movies of 1953, with movie trailers when available. Action hero Steve McQueen made his first appearance on ...
#94 of 167 The Best Family Drama Movies of All Time 5.3k VOTES The best family drama movies represent a fun bonding experience for the entire family. What makes a good family drama? Typic...
#2 of 49 The Best Movies About Tokyo 313 VOTES Tokyo, also referred to as the “Eastern Capital” is the capital of Japan and the most populous metropolitan city in the enti...
Fantastic Movies Americans Missed Out on Because of the Language Barrier 9.7k VIEWS Outside cinephiles and film students, most American movie-goers do not watch foreign films. It’s just a fact of cinema life....

Tokyo Story is also found on...