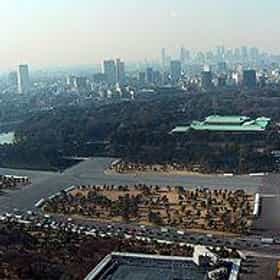 Tokyo, officially Tokyo Metropolis, is one of the 47 prefectures of Japan. Tokyo is the capital of Japan, the center of the Greater Tokyo Area, and the most populous metropolitan area in the world. It is the seat of the Emperor of Japan and the Japanese government. Tokyo is in the Kantō region on the southeastern side of the main island Honshu and includes the Izu Islands and Ogasawara Islands. Formerly known as Edo, it has been the de facto seat of government since 1603 when Shogun Tokugawa Ieyasu made the city his headquarters. It officially became the capital after Emperor Meiji moved his seat to the city from the old capital of Kyoto in 1868; at that time Edo was renamed Tokyo. ... more on Wikipedia

The Top Must-See Attractions in Tokyo 768 votes List of top things to do in Tokyo. This list ranks the top tourist attractions in Tokyo, the capital city of Japan. Tokyo is...
The Best Movies About Tokyo 313 votes Tokyo, also referred to as the “Eastern Capital” is the capital of Japan and the most populous metropolitan city in the enti...
Super Nifty Pictures From The Tsukiji Fish Market 323 views If you're into Japanese cuisine and sushi culture, chances are you've assumed there's a giant Tokyo fish market that acts as...

Tokyo is ranked on...

#25 of 96 The Top Party Cities of the World 28.2k VOTES Beating out all the rest of the cities on the planet, these top party cities of the world feature tons to do and anyone who ...
#4 of 27 Where Should the Next Grand Theft Auto Game Take Place? 8.3k VOTES The Grand Theft Auto franchise continues to be the gold standard for sprawling, open-world, sandbox gameplay. Grand Theft Au...
#6 of 20 People who voted for Tokyo... Men are 3x more likely to vote for this Cities You Most Want To Visit 24.7k VOTES The cities I want to visit is a list of the most beautiful cities in the world that hold an alluring appeal in a way that ma...
#41 of 52 The Best World Cities for Artists 5.9k VOTES List of the best international cities for artists. The art community is spread far and wide across the globe. It is the drea...
#14 of 59 The Best Cities to Party in for New Years Eve 22k VOTES While the most famous cities for New Years Eve parties (like New York City and Boston) get the majority of the press, there ...
#27 of 87 The Best Family Vacation Destinations 3.5k VOTES List of the Best Family Vacation Destinations ranked from best to worst. Taking a vacation with your family can be a lot of ...
What Cities Are Best For You, Based On Your Zodiac Sign? 29.3k VIEWS Astrology can offer you guidance on practically anything you'd want to know: what dog you should get, what kind of...
Cool Aerial Photos of Cities at Night 3.2k VIEWS Even if you live in a penthouse on Central Park West, you'll never have a better view than the astronauts at the Internati...
Gay Events & Pride Parades Around the World 17.5k VIEWS Here is a list of gay pride parades and gay events celebrated around the world. The LGBT Community in each city plans and pu...
Public Transportation Maps From Around The World 2.9k VIEWS If you've ever used public transit, then you've likely encountered public transit maps, some of the most colorful and engagi...

Tokyo is also found on...

The World's Most Densely Populated Places